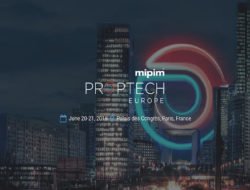 In Helsinki, a healthy vision of the smart city

Smart bins, smart grids, zero-carbon buildings: the Stockholm Royal Seaport wants to be the flagship of all Scandinavian smart cities. This district plans to build 12,000 housing units by 2030 and to create 35,000 jobs.

Cranes appear on top of roofs, construction sites at every street corner… Stockholm looks like a great building site. It prides itself on being the fastest growing European city. Among its many challenges: to house and feed a population on the verge of crossing the number of one million inhabitants, while preserving its image as a green capital.

After the eco-district of Hammarby Sjöstad, which has become the reference, the authorities of Stockholm have launched a new large-scale project in the northeast of the city. It is here, in this neighbourhood, which name is hard to pronounce, Hjorthagen, that the Stockholm Royal Seaport is seeing the light of day. The works started in 2009, and the first tenants were able to enter in the autumn of 2012. Currently, some 4,000 apartments have already been built, at a rate of 600 per year. It really is an assembly line.

As in many smart projects, the ambitions are first and foremost related to energy. And without any equivocation: to make this neighbourhood independent of fossil fuels by 2030 and to reduce CO2 emissions below 1.5 tonnes per person, compared to the current Stockholm average of 4.5 tonnes. To do this, the energy expenditure in these new buildings should not exceed 55 kW/h per square metre, compared to 90 up till now.

To achieve this, the Stockholm Royal Seaport has a very broad range of technologies: not only are the buildings all covered with photovoltaic panels, but the whole of the district is connected to a plant for biofuels created to feed the heat network of the city. Underground, a network of waste recovery lies next to water pipes and electricity cables. The first point of access: the sink, with a shredder, for organic waste.

The other is located at the bottom of the buildings. By using an electronic key, which allows you to retrieve data on the frequency and the weight of the deposited waste, each person can throw out his food in a tube, which is then recovered in the basement and then, transported to the biofuel plant. The other waste is sorted into special containers before being sucked at a speed of 70 km/h through a compressor connected to a pipeline, which leads to the processing unit. According to the city, this system provides a 90% reduction of the pollution caused by garbage trucks. Everything is recycled, and nothing is lost. Except for bad habits.