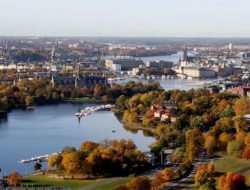 How Stockholm turns an industrial site into a smart...

Planting a tree in the city replaces five air...

In Helsinki, a healthy vision of the smart city

Finland, which was awarded the title of greenest country in 2016 by the Environmental Performance Index, also wants to be at the forefront of responsible urban development. Nine years ago, it launched the Axis of Growth programme that aims to build three new neighbourhoods: Kalasatama, Vallila and Pasila. A set of smart cities with shops, offices and housing, in order to create living environments conducive to innovation, entrepreneurship and the wellbeing of its inhabitants.

The Finnish capital has to solve a tricky equation: the municipality has set itself the goal of reaching carbon neutrality by 2035, even as its population is expected to grow by only 640,000 residents today to 780,000 by that time. That means the energy efficiency requirements are drastic. In Kalasatama, most advanced to date, all buildings must connect to the urban network of heating and reversible air-conditioning, powered by immense heat pumps. They recover energy from the city’s wastewater. A first in Europe. The buildings must also integrate an intelligent energy network to benefit from the energy from the sun. Each building is provided with equipment for storing electricity so that people can generate at least 30% of their own energy and sell their surplus.

Already well served by public transport, Kalasatama will offer housing, shops, offices and leisure and cultural spaces, all close to each other. One of the goals of this project is to get an extra hour of free time per day for each inhabitant. The neighbourhood should be composed of a total of eight towers containing between 20 and 33 floors. It will also host a care centre of 18,000 m², as well as a shopping centre of 60,000 m², planned for late 2018. The building of the centre of Kalasatama began in 2011 and is expected to be completed in 2021.

With its vegetated roofs, Pasila will provide 0.5 million square meters of apartments. But its ambition is first and foremost to become a hub of strategic importance to the business and the media. Vallila, a former industrial zone, will be transformed into a multifunctional zone, with housing, offices and shops. Technologies for health, design, finance and education will be at the heart of this new neighbourhood that wants to offer high-value services with discrete technology, such as connected rings to monitor blood pressure… Like the patients and doctors of the ultra-modern health centre that recently opened its doors, the first inhabitants of Pasila take part in the experiments of the neighbourhood. The development of this area has already attracted investors, such as the company GE Healthcare – the health care branch of General Electric – which invested €28 million. With a definite healthy vision of the smart city.

» Environment » In Helsinki, a healthy vision of the smart city