Amsterdam: a demountable and sustainable court 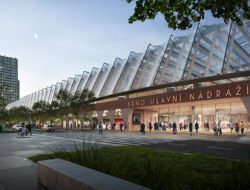 Czech Republic: the new station in Brno, a neighbourhood...

Is it possible to repeat the exploit of Bilbao in Arles with the help of Frank Gehry?

In any case, this is the question that is on everybody’s lips following the inauguration of the Frank Gehry Luma Tower. This urban revolution echoes the revival experienced by Bilbao thanks to the Guggenheim museum designed by the very same Gehry.

The Luma Arles Foundation is a new contemporary arts centre that spans a total built area of 11 hectares. It was designed by Canadian-American architect Frank Gehry, designer of other iconic buildings such as the Vuitton Foundation or the Film Library in Paris and the Dancing House in Prague. Gehry is one of the main contributors to a trend that consists in building highly emblematic cultural buildings.

It was commissioned by Maja Hoffman, a Swiss benefactor and daughter of the WWF’s co-founder. She has been active in the ‘Little Rome of Gaul’ for some time. Located in a former SNCF factory on the outskirts of the city,the Luma cultural campus brings another world-class attraction to this small city of barely 50,000 inhabitants, which was already renowned for the Van Gogh Foundation, the Actes Sud publishing house, and its Photography Festival.

The 56-metre-high marvel (which took 14 years to complete) features a biodiesel plant and solar panels that provide some of the campus’s energy. It uses interior cladding made from local materials that include agricultural waste, seaweed, and salt, to replace the plasterboard that was initially planned (sustainability was not yet a trend when Gehry began his work in 2007).

Inevitably, the building has its critics. Beyond the style, in stark contrast with that of the Camargue city, there are fears that property prices will rise and gentrification will be taken to extremes. In a long interview for Dezeen magazine, Gehry (92) detailed his concerns linked to the sustainability of his buildings and his will to ‘be part of the city but not change the city’. Time will tell!

» Architecture, Real Estate, Technology » Is it possible to repeat the exploit of Bilbao in Arles with the help of...