How cities are adapting to rising temperatures

London transforms its street lamps in to electric charging terminals

And what if charging electric cars wasn’t a problem anymore? Ubitricity, a German start-up proposes transforming street lamps into charging terminals. Simple and efficient, the concept has already attracted Londoners.

In London, between Saint James and Buckingham Palace, thousands of lamps installed more than 200 years ago are still gas-powered. Antiques that have stood the test of time… but which could now be sacrificed at the altar of modernity. Indeed, London has been transforming its street lamps into electric car charging terminals for several months now. Since December 2016, the British capital has been conducting an experiment in the Kensington and Chelsea districts, where the energy operator UK Power Networks and the charging solutions developer Ubitricity have decided to turn public lighting into a charging source. A highly original solution in a country that in 2016 reached the milestone of 100,000 electric cars on the road.

In practice, users only need a personalised charging cable with an integrated electricity meter. At the foot of the post there is a socket where anyone with a cable can plug their car in to charge it. The cable, provided by the German start-up, is fitted with an electronic box with which users can select their electricity supplier and identify themselves for billing. Better than at the petrol station, this is sent directly to the driver’s smartphone. 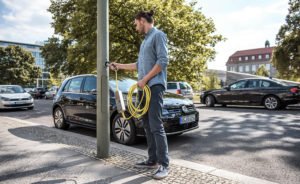 An economical solution that avoids having to build new terminals and optimises the use of the existing electricity network. “Turning a street lamp into a charging point can be done in an hour or less“, insists Knut Hechtfischer, Ubitricity’s founder. Already adopted by hundreds of Berliners, this system could quickly be imitated. Several British districts have already signed with the German company. This concept goes against the interests of the big electricity companies, desperate for a growth driver in the face of the energy transition.

But the British authorities underline that in London 46% of households don’t have access to a car park to charge their vehicles, and 33% in the suburbs. “Using street lamps as charging points gives electric vehicle users access to terminals nearer their home or work“, says Tim Coleridge, elected representative of the Royal Borough of Kensington and Chelsea. This could boost the use of electric vehicles in urban areas.