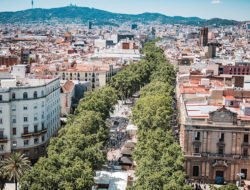 Combining offices and the heart of life

Renovating rather than demolishing, while bringing back social ties

In the Netherlands, a recent wave of large-scale projects is encouraging the creative reuse of abandoned industrial sites.

The transformation of existing buildings for purposes different from those originally intended is as old as architecture itself. The latest initiatives in this area are plentiful, in that they bring life and human interaction back to areas which, until then, were only industrial. The following worthy examples advocate the reuse and transformation of old industrial buildings rather than demolishing them. All designed following a 100% circular approach.

The former Kleefse Ward industrial park has been redeveloped into a “clean technology campus”. It welcomes innovative companies from the energy sector. A former nylon factory has become the KB Building, an office building with flexible and varied workspaces for companies of different sizes. Better yet: in the transformation, the architect also provided for the possibility – quite improbable it may be – of being able to restore the factory to its original function.

A former locomotive shed dating from 1932 is gradually transformed into a “City Campus” with a library, common workspaces, conference rooms, art classrooms and a large room dedicated to events. Throughout the project, the architects restored and preserved most of the existing steel structure, with its transparent facades in industrial glass. Inside LocHall, they added an “urban balcony”, a large public winter garden with panoramic views. The result is impressive.

In Slotervaart, a socially troubled suburb largely built in the 1960s and 1970s, a former school building has become Ru Paré, a community centre offering education and training services (e.g. IT or languages) to residents who, in exchange, provide collective services. And to establish the circular character of the renovation, most of the building materials were obtained through an “urban extraction project” from three neighbouring buildings which were themselves destined for demolition.

Finally, still in Amsterdam, De Ceuvel is a former shipyard where abandoned boats have been transformed into offices, workshops and workplaces, as well as meeting and catering spaces. The place has become a “clean-tech playground”, testing sustainable technologies like composting toilets, bio-filters, water reuse systems and renewable energy production.

In short, great initiatives that will serve as an example, well beyond the Dutch borders.

» Architecture, Environment, Other, Real Estate, Technology » Renovating rather than demolishing, while bringing back social ties