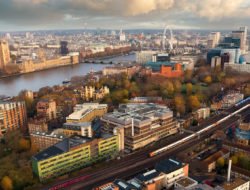 Want a London office with a negative carbon balance?

Sidney: offices designed with the sun

A team of designers has just completed the installation of the largest urban farm in Asia. Its originality? It is located on a roof.

Located in the suburbs of Bangkok, this green roof (with a surface of 22,000m2) is installed on top of Thammasat University, the second oldest academic institution in the country. The surface was unoccupied and even neglected, according to the University. Today, it has become both a public place and a sustainable food farm.

The TURF project (for Thammasat University Rooftop Farm) combines the principles of organic farming, the technique of rice terraces and the strategies of modern green roofs. The cascade roof absorbs, filters and slows down runoff 20 times more efficiently than a conventional concrete roof. Rainwater zigzags down the slopes. At the end of its journey, it is collected in four retention basins, which allows both to mitigate rainfall and store excessive rainfall for future use in the event of drought.

What is produced on these green roofs? Essentially campus food (hard to make a shorter circuit). But the project has even more to offer: taking advantage of the relief, TURF has created an open-air theatre, with a panoramic view of the entire city of Bangkok. The roof is also equipped with solar panels, capable of producing up to 500,000 watts/hour, which allows both to power the farm and even the entire university below.

In addition to all these direct benefits, this project was also designed to raise awareness about agricultural practices among students and citizens. It is, for instance, possible to take introductory courses in agricultural techniques and landscape management. For the university, it is a way to engage its future graduates in the climate, urban and ecological issues of tomorrow.