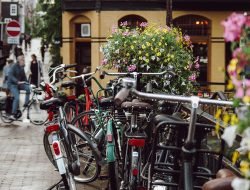 The bicycle, an urban planning tool

Oslo: a sustainable Munch Museum open to all

The ideal sustainable city of the future is already for 2030!

Famous Danish architect Bjarke Ingels is designing a city called Telosa, which should be built “from scratch” in the American desert.

The promoters of Telosa explained that “their vision is to create a new city in America that sets a global standard for urban living, expands human potential and becomes a model for future generations“.

First, a large plot of land will be acquired to be ceded to a cooperative so that its growing value can finance the city’s development and improve the well-being of residents. All this will be done with funding offered by Marc Lore, a billionaire who made his fortune in online commerce (especially on behalf of the Walmart chain).

Primarily based on the principles of garden cities in the UK, Telosa is expected to become the most sustainable city in the world. With a range of possibilities made possible by simply starting from scratch. “From global warming to water and energy, how can we do better for future generations? And what technologies and other policy and design innovations can we incorporate into this new city?“

A more sustainable and fairer future

The project is genuinely futuristic: Telosa plans autonomous vehicles, electric planes, the underground movement of materials, photovoltaic roofs, raised water storage and aeroponic farms that will allow the structure to share and distribute everything it produces. But, above all, the philosophy of Telosa is that of a city with an economic system in which the citizens are the principal shareholders. Thus, when the city is doing better, the residents are also doing better. Marc Lore calls this equitism (a word bringing together equality and capitalism). In other words, it is about promoting a new harmonious society where differences make stronger instead of dividing and where rights and opportunities are guaranteed for all.

The city aims to reach a population of five million over the next 40 years. However, its designers are already aiming to create a city of 50,000 inhabitants by 2030. That is to say tomorrow.

» Architecture, Environment, Mobility, Other, Real Estate, Technology » The ideal sustainable city of the future is already for 2030!