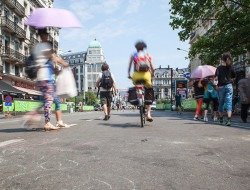 Imagine a train capable of moving at a speed of 1,200 km/h inside a low-pressure tube, with no rubbing and driven only by solar energy. Utopian? Nevertheless this was the slightly mad challenge thrown down in 2013 by the South-African entrepreneur Elon Musk, already fronting Tesla electric cars and SpaceX low-cost space rockets. The technical drawings were then made public by means of an open source model. Today, two Californian companies have come on board and have scheduled the initial tests for this summer, partially financed by crowdsourcing.

The end objective is ambitious, but is supported by a solid business plan detailed by Elon Musk himself: to create an infrastructure that would link cities at the speed of sound, for a total cost 10 times less than the current high speed train project between Los Angeles and San Francisco. According to Hyperloop’s instigators, a ticket to reach these two cities in 30 minutes on board their supersonic train would only cost 20 dollars… and would guarantee the project’s profitability. Science-fiction? Not really: the plan foresees that the first line would already be operational in 2018.

» Environment, Mobility, Technology » Was the hyperloop already operational in 2018?