Luxembourg: construction robots straight out of a science fiction...

The European Commission has just named the City of Leuven “European capital of innovation”. A million euro prize is awarded for a proactive approach aimed at making the most of innovation to improve the quality of life of its citizens.

After Barcelona and Nantes, the Belgian university city has just been awarded this prize within the Horizon 2020 programme, the EU’s research and innovation programme. The other five finalist cities were Cluj-Napoca (Romania), Espoo (Finland), Helsingborg (Sweden), Valencia (Spain) and Vienna (Austria). They each receive €100,000.

The city has developed, through various workshops, commissions and associations, an innovative and exemplary model of collaboration between public authorities, private and academic partners and citizens. This model has just been crowned by the European Commission and is set to become a laboratory of the future. As Mohamed Ridouani (sp.a), the Mayor of Leuven, says “our mission is to lead the way towards a sustainable and prosperous future with and for all.”

Here are some of the most original Leuven initiatives that have caught the attention of the Horizon 2020 programme. 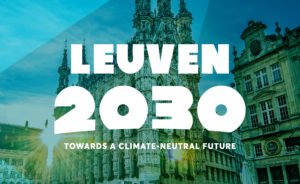 Towards a climate-neutral future

This cluster dedicated to innovation is composed of companies, institutions, authorities and several associations. It aims to develop a pool of talent in health, high-tech and creativity. As their website says: “What happens in Leuven…changes the world“.

The creation of a “Climate Street”

In recent years, Frederik Lintsstraat has been the scene of an impressive urban green transformation: sustainable homes, initiatives for responsible and local mobility and consumption, the reconstruction of social connections…

This collaborative platform was born during the Covid crisis. It connects several thousand citizens experiencing difficulties with volunteers who respond to the expressed needs.

The Mayor of Leuven intends to strengthen the dynamics created in his city as much as possible and plans to create a City Transformation Academy that could serve as an urban laboratory for the future.

» Architecture, Environment, Technology » “What happens in Leuven… changes the world!”