Nijmegen (Netherlands): building with materials that grow back

Basel: learning and shopping in one place?

Are our cities accessible to everybody?

We asked Georgios Maillis, the Chief Architect of the City of Charleroi, to read and comment an article published on the American site Bloomberg CityLab that details how modern cities have gradually improved accessibility for people with reduced mobility.

What does the article say?

With Covid-19, we have suddenly seen the emergence in cities of streets for non-car users, pavements that have become bar terraces, car parks transformed into playgrounds or relaxation areas, urban spaces redesigned to create social distance… These sudden and improvised changes echo urban transformations that appeared in the 50s, usually under pressure from groups defending the rights of people with disabilities.

We have adopted the most emblematic of these urban transformations to such a degree that we don’t think about it anymore: curb cuts, which allow strollers or wheelchairs, but also simple bicycles or suitcases on wheels, to get around without much trouble. Historically, our cities have been built for sporty, healthy and resilient adults. Not for playing children, not for toddlers taking their first steps, not for seniors for whom walking is more difficult or people with reduced mobility… An American act, which dates only from 1990, made these accessible curb cuts mandatory. But already in the 1940s, groups of people with disabilities, and especially veterans of the 2nd World War, were clamouring for cities more adapted to individuals with reduced mobility.

And there are other examples of urban adaptation to people with disabilities: buses whose platform is extendable to allow strollers to get on, stairs to access public buildings that have ramps with a gentle slope, 20 mph zones that protect vulnerable users… 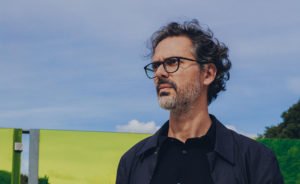 What does the Chief Architect say?

We asked Georgios Maillis, Chief Architect of the City of Charleroi since 2013, to read this article and explain how he envisages urban access for all. “I don’t think about what place will be accessible to whom and how. Let’s expand the notion of people with disabilities: all of us, at some point in our lives, are going to be a person with reduced mobility (PRM). Whether as a child, after a ski accident, after a birth (the stroller), as we get older… We must not think in terms of accessibility for this or that type of person but rather think of an urban centre as a whole that concerns everyone and all the time.“

Isn’t that the case now?

“No, because the main problem of modern cities is that they were designed not as a whole but in a fragmented way. A contractor focused on the road he had to build; an architect on the house he had been commissioned; a road worker on the pavement he had to lay… Everyone did their job well, but no one talked to the other. As a result, our cities are the addition of small spaces, juxtaposed tenders…“

How can we deal with this fragmentation?

“For the past few years, we have been trying to encourage all those involved in building and transforming our neighbourhoods, be they public or private, to think together about what a public space is, how it works and what it is for. So that in the end, an urban environment is accessible to all and no longer a collection of obstacles one behind the other.“

A virtuous example that illustrates this philosophy?

“Yes, Lower Town in Charleroi. It has been redesigned and redone so that everyone can live, work, move, consume… fluidly and easily. The article talked about how the health crisis has changed pavements and terraces: years ago, we developed a Charter for shops and terraces, eliminating the municipal tax and proposing shopkeepers to invest in public space, for the benefit of consumers and citizens.“

The Upper Town in its current state, whose renovation will start soon, including the development of the Charleroi Creative District project.

» Architecture, Environment, Other, Real Estate » Are our cities accessible to everybody?