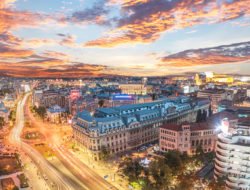 Walking to regain a central role for better town...

Overcrowded transport, expensive housing… Will the Greater Paris projects resolve these matters? Europe’s largest building project including 200 kilometres of railways and 68 stations is under way.

With Greater Paris, France’s capital hopes to reinforce mobility between its centre (that is, the Paris municipality) and the 130 towns in the inner and wider suburbs that make up the metropolis. It must be said that Paris is lagging far behind. Where Paris only has 370 bus routes, London has 700. The same goes for the railway network: the French capital has 16 underground lines and 16 Transilien lines whereas its English counterpart has 18 and 25 respectively.

A gap that will perhaps be reduced considering the investments that have been announced by the Île de France region. 25.5 million euros will be spent on building 200 kilometres of railway tracks (metro and RER) and 68 stations by 2030. The goals are to carry two million Parisians each day, serve landlocked areas and Paris’ three airports, create inter-suburb links and, more importantly, improve living conditions in large metropolitan areas by facilitating travel between one municipality and another without the need to cross the often-overcrowded centre. This is a considerable task as among the 7 million daily commutes, 23% of those living in the wider suburbs suffer a one-way journey lasting more than an hour.

The Greater Paris scheme was also designed to boost urban development around the 68 new stations, such as the Villejuif-Institut Gustave Roussy station, where a cluster dedicated to cancer research is to be created. According to estimates by the SGP, building the automatic metro would enable the construction of 250,000 housing units and generate between 115,000 and 315,000 jobs over the next 25 years.

Three tunnel-boring machines are at work at the same time beneath Parisians’ feet, and on the surface, in the future neighbourhoods around the stations, construction is in full swing. The record of 100,000 building permits granted within 12 months was reached in September 2018. A breath of fresh air for Paname. Paris, with 21,000 inhabitants/km² is one of the most densely populated cities in the world … and one that is being increasingly deserted due to the almost continual increase in property prices. In five years, the capital has lost 60,000 inhabitants. Prices are rising all the time, pushing modest income households further and further away. In ten years, the price of Parisian property has risen by 43%. In 2018, the price per square metre was €9,353. An increase of 7% in just a year.

The Greater Paris scheme is therefore part of a rationale to transform the town on itself, with the aim of erasing physical or symbolic boundaries with the suburbs by absorbing them into Greater Paris. Intensifying the city means creating housing for all around the future stations and transforming wasteland into new urban opportunities.