Sidney: offices designed with the sun 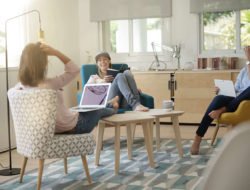 Luxembourg: 3,000m2 for living together

Rotterdam: art, mirror of the city

Generally speaking, museums exhibit only 6 to 10% of their collections. The world’s first art depot (Kunstdepot) has just opened in Rotterdam. It will display the 151,000 objects in the Boijmans Van Beuningen Museum and allow you to take a look behind the scenes of a museum.

Usually, the storage rooms of a museum are forbidden access. For the first time, a museum (for 170 years specialised in ancient paintings and fine arts) shows what it has been hiding. It should be noted that the Museum aan de Stroom in Antwerp practices the same policy but in a more modest way. This huge salad bowl, covered with 1,664 mirrors (for a total of 6,609m2 of facade), reflects and reminds passers-by of the image of the city that hosts this extravagant building. But their own image as well, as each of these mirrors has been sponsored by residents or associations of the City of Rotterdam, so that everyone can call this fantastic new addition to the skyline of Rotterdam their own.

Architect Winy Maas (bureau MVRDV) has filled the Kunstdepot with delightful inventions. The front door, for example, is a hidden device in the facade. A push of a button brings up a double glass door (as if opening the door of a bus). The major attraction inside is a moving showcase, which is actually a lift to transport the works of art.

The project was conceived as a behind-the-scenes look. Rather than observing a work in its museum setting (often sanctified and a little cold), here there’s more emphasis on the conditions of creation of such a painting, the ways of preserving or restoring a drawing … It’s all about preserving or protecting priceless treasures, against theft, fire or possible dike failure. This explains why the collections are located 8 metres above the NAP (Normaal Amsterdams Peil, which could be compared to our “sea level”).

The view from the roof overlooks the whole city. The visitor walks among the birches that occupied the land before the erection of the Kunstdepot. These are the same trees, and they were replanted on top of the building.

The building cost 90 million euros and was designed according to a whole series of sustainable techniques that led it to win the ‘excellent’ score of the BREAAM certification. A combination of solar panels, thermal air management, LED lighting and high-performance insulation makes it a building neutral in terms of consumption. Rainwater will be stored and used for irrigation and toilets. This storage, combined with the green roof, will reduce run-off and feed a pond located next door.

So far, only a few thousand visitors have been allowed to visit the empty building, which will, in the coming months, host a collection of 87,000 prints. To visit as from 2021 in Rotterdam: it is planned to welcome 100,000 visitors a year.