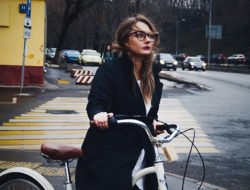 The role of Marthe Nyssens is unique in the world. In fact, she is the only vice-rector in a university management team who is mainly in charge of subjects related to the social and ecological transition. Divercity met with her to discuss some aspects of this ambitious programme, which will concern each of the 35,000 members of the university community on the site of Louvain-la-Neuve. 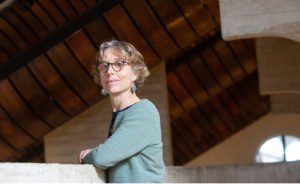 Marthe Nyssens graduated from the Universities of San Diego (Master of Arts in Economics) and Louvain (Doctor of Economics). Since 2009, she has taught in the field of social economics and social and ecological transition. She is currently vice-rector of transition and society. ©Alexis Haulot.

Where does this completely new idea of entrusting the subject “transition” to one of the university’s leaders come from?

Until now, sustainable development had traditionally been entrusted to one of the vice-rectors, who managed this subject in addition to his or her usual work. The strong and political signal sent by UCLouvain and its rector Vincent Blondel was to say that it was time for a member of the management team to concentrate all their energies on these issues.

Was there a trigger?

Yes, the climate demonstrations last spring, which mobilised young people and many members of our community, including myself. This created an awareness: it was time to act. And it was even crucial as a short-term issue, also for universities.

UCLouvain has begun a “Transition Plan” (see inset) with working groups that educate on topics essential to the life at university: education, research, energy, mobility, sustainable investment and consumption, food and biodiversity. Let’s approach some of the topics with practical examples. Food, for example…

Daily, the “restosU” offer a “smart” dish that challenges the guests of restaurants on issues of nutrition, healthy and sustainable food and short supply chains. Twice a week, this “smart” dish is vegetarian. In addition, the Lauzelle University Farm has become an experimental farm, which serves as a support for teaching and research, but also as an interface with local market gardeners. We want to be a reference centre in organic farming and agro-ecology.

Since 2018, all new investments made by UCLouvain have been exclusively in environmentally and socially responsible funds. We also rely on new sustainability standards such as those of Febelfin or Financité to “clean up” our entire portfolio. But we have already greatly improved it to be in line with our ambitions.

The university will develop an ambitious sustainable development strategic plan. It is structured around three main themes: teaching, research and sustainable campuses. One of the first founding acts of this plan was to make the city’s carbon balance. The Transition Plan will be the compass of the 2020-2021 academic year

Mobility is also part of this “Transition Plan”.

And this is not the easiest topic. The site of Louvain-la-Neuve is obviously less well served than our location of Louvain-en-Woluwe: there is no underground that takes you to the foot of the colleges, the train connection between LLN and Ottignies is not optimal… in short, we had to be creative. For years, public transport passes have been fully paid by the employer, company cars do not exist, and we encourage sustainable mobility. We will be proposing a charter for international travel very soon: is it really essential to go to a symposium? Is there a way to get there by train rather than by plane? etc.

How do you work with the municipal authorities on this “transition”?

The peculiarity of Louvain-la-Neuve is that the university owns a large part of the land on the university site, which is operated through leaseholds. We are therefore close partners, ever since the famous “potato field” as the site was called at the time came about. Back then, we struggled to attract residents here. Today, housing in Louvain-la-Neuve is immensely popular. The future Athena-Lauzelle district is one of the last districts still to be developed in the municipality, and we are working to make it an example of our Transition Plan. Hand in hand with the municipality.

It has been said, you are appealing to the ideas of the entire academic community. In particular by organising “collective intelligence workshops”.

Which, unfortunately, were organised at the end of March, during the lockdown. But that didn’t stop us. Using videoconferencing tools, 80 of us met for four afternoons, either together or in small groups in virtual rooms to imagine the university of the future. With really encouraging results. You know, rather than this or that specific measure, what matters to us is that, in each of the themes identified, we manage to implement some impactful measures, which will make a difference. And then we will have succeeded.