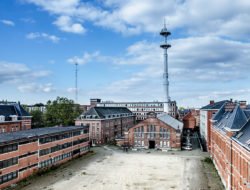 In a striking video, the City of London has revealed its planned skyline for 2026, grouping all the skyscrapers to be built over the next seven years. Thirteen buildings will be added to the London’s skyline including one that will be 290 metres high.

The City of London Corporation, that manages the city, has released a series of images revealing what the skyline will look like in seven years’ time. The City has listed 13 buildings that are to be added. Seven projects are under construction in the business district including the 62-storey-high 22 Bishopsgate, which is built on the site initially intended for the Pinnacle.

PLP Architecture has been commissioned by AXA Real Estate and Lipton Rogers Developments to design a new tower with the ambition of creating ‘London’s first vertical village’. It will include shops, restaurants and leisure areas. A beautiful project with an emblematic tulip-shaped building, which may even outshine the famous Gherkin, is also in the pipeline.

At the same time, a report by NLA (New London Architecture) suggests that no fewer than 510 towers will be part of the British capital’s skyline in the years to come, compared to the 455 forecast in 2016. Among them, 115 schemes are already under construction. More than 90% of these buildings are residential projects that should provide Londoners with roughly 106,000 new dwellings.

The Tower Hamlets District in East London is expected to have the largest number of buildings, followed by Greenwich and Southwark. Despite the considerable number of work sites, no tower measuring more than 200 metres was delivered in 2018. However, the British capital is looking to put Chinese megacities and New York in the shade with a 290-metre-high tower on the drawing board.