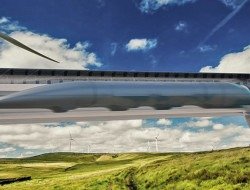 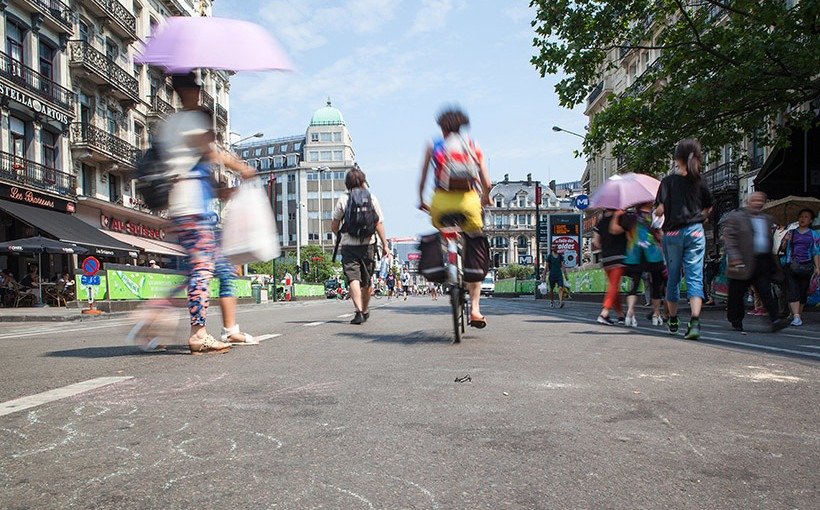 Is Brussels and its city centre going to witness a real urban breakthrough? In any case, major changes are on the way with the city centre redevelopment plan, the pedestrianisation of the boulevards of the city centre and the traffic plan currently being tested. What are the stakes? Here are a few answers illustrated by several visions of Brussels’ future.

Reappropriation of public areas by the citizen, quality of life, mobility, revitalisation of the economy, architectural heritage…. The stakes of urban development in Brussels are many and often closely linked. On the ground, things are moving, with the recent presentation of the town centre development projects which should by completed in 2018.. and since 29 June 2015, a first 8-month test of the traffic plan linked to the pedestrianisation of the city centre boulevards.

Returning the city and its public squares to the citizen

What are the key areas of the city centre redevelopment plan? Els Ampe, the Mobility Councillor in Brussels: The pedestrian zone has doubled and now covers 50 hectares, from the Place Fontainas up to the Boulevard Adolphe Max. Our aim is to return the city and its public squares to the citizen. So more user-friendliness, particularly with the green areas on the boulevards which increase from a surface area of 200 up to 3250 m2, but also the enhancement of architectural heritage and the revitalisation of trade in the city centre. We want to reduce through-traffic in this part of the city centre by encouraging soft mobility: creation of 3 kilometres of cycle paths, optimisation of the STIB service with pentabus – i.e. a bus entirely devoted to movement within the pentagon – running the length of the pedestrian zone… We are also planning drop-off zones, for example in front of schools and hospitals and automobile access reserved for pentagon residents. ”

Will the pedestrianisation of the city centre enable Brussels to effect a paradigm shift that has already been made elsewhere? Patrick Bontinck is CEO of visit.brussels, the Brussels region tourism communication agency and has a clear opinion on the matter. “This is a great opportunity for Brussels city and region. Why? Because it enables human beings to re-appropriate the city, by occupying the space of the big boulevards and their arteries, which since 1958 had been increasingly reserved for cars. Here, the will to mark a real difference is clear: the pedestrianisation is not confined to just a few alleys. It links the city centre and the canal, which up to then had been separated by a big main road. This symbolic homogenisation is important for our capital. Obviously and like in any big long-term change project, there may be occasional difficulties. But it is essential that Brussels doesn’t, in a few years, become one of the last European capitals whose historic centre is crossed by motor traffic. ”

The ARAU’s point of view

Although the principle of pedestrianisation doesn’t seem to pose a problem, some are critical of certain aspects of the project. This is the case of the Urban Research and Action Workshop (ARAU). Since 1969, the ARAU has been defending the right to live in the city in proper conditions, explains Isabelle Pauthier, its director. “Paradoxically, the city plan risks prioritising access to the pedestrian zone by car, due to the absence of a full agreement with the STIB, but also to the creation of new car parks when 20,000 parking spaces already exist, whose occupancy rate peaks at 60%. The traffic plan includes a one-way loop, which encourages speeding, as we have already seen on the Jacqmain and Max boulevards. Furthermore, the will to develop the attractiveness of commerce, tourism and events in the city centre as priority, will pose a problem if this is done to the detriment of other issues, such as quality of life. We also deplore the fact that the studies do not meet legal provisions and also the autistic way in which the consultation was conducted and the absence of a public inquiry, which explains the appeal brought before the Council of State. We recommend a mix of soft mobility: real infrastructures for cyclists travelling between the North and South sides, in which pedestrians will also have their place, but also an overground tram between the Wiels and Tour & Taxis to get to the city centre’s shops. As for the underground pre-metro lines, they could consequently limit their stops to the stations served by the metro (Midi, De Brouckère and Rogier). ” 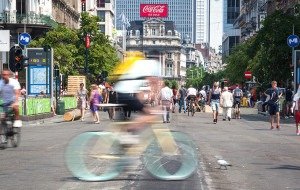 From the digital call to the urban picnic

Other types of complaints, highly fashionable at the moment, have been aimed at the pedestrian zone. “The starting point of Picnic the streets is a carte blanche from Philippe Van Parijs calling on the digital generation to mobilize in favour of a Brussels designed for the citizen”, explains Bram, one of the movement’s instigators. “A Facebook group was created and quickly transformed into events, these being giant picnics held in the centre of Brussels, pedestrianised by force of circumstance. But this visible part of our action is not an end in itself. We defend the creation of spaces and policies leading to a real re-appropriation by the citizen of the urban area. Our opinion on the plan? Yes but no! Yes, because we are for pedestrianisation, but no because of the bling-bling side of the project, which basically targets tourists and consumers and which is too favourable to the car.”

Whatever the fate in store for Brussels’ pedestrian zone, the initiative has the merit of stimulating debate. “It will always be that way, however well the decision is prepared, however consensual the approach. It will always be that way in a lively, daring city, a city that tries, a city that reinvents itself. Trial and error, adaptation, aren’t these natural steps to be taken on the road to success?” says Stéphan Sonneville, CEO of Atenor, who salutes the audacity cities like Brussels need to make their necessary mutation a success. He continues, in conclusion:

“I’ll keep quiet here about what I think of the Brussels pedestrian zone, which is quite mixed, and concentrate on the approach. Yes, Brussels, more than any other city, needs leaders who take risks, who make decisions and implement projects. Yes, sometimes it is necessary to reconsider what you thought was set in stone to explore new possibilities. This pedestrian zone is a controversial project, but underlying it is a determined vision of a pleasant and attractive city for residents, visitors, entrepreneurs, etc. In this respect, the pedestrian zone seems to be an audacious business move. The well-being, rather than the wealth, of some is a value created by the audacity, vision and courage of others. ” 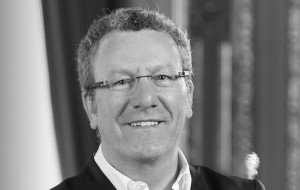 What lessons would you draw from the first weeks’ trial of the pedestrian zone in Brussels’ city centre?

“Two months after the opening of the pedestrian zone, we see a new calm in the city, a change in the behaviour of the city centre’s users and a brand new atmosphere: far from stress, strollers linger on the boulevards, enjoy the temporary infrastructures deployed, the activities being held. We have the impression that citizens are taking more time and no longer hurry through the city centre.

Thanks to the good weather this summer, the city centre saw the influx of Brussels people, Belgian and foreign visitors increase considerably. This is what we want to achieve for Brussels in the long term: a cultural and economic blooming. A city should be lively and dynamic and not be deserted by its residents.

However, we are aware that this kind of urban redeployment cannot be done in one day. With local residents, experts and technicians engaged in the project, from 28 June 2015 we are going to learn about the effective use of the new pedestrian zone and its surrounding area. Analysing the situation on the ground and listening to the City Council, its inhabitants, is vital in order to be able to provide a new city centre as adapted as possible to everybody’s needs. “

You personally have been highly involved in this project, which exposes you to criticism. Do you think that Brussels and Belgium in general has sometimes suffered from a lack of initiative preventing it from moving forward?

“Change is frightening because it is synonymous with renewal, the unknown, but also changes in our habits, our daily routine. However, we must have change to move a city forward. Can we still live in a city built on a 19th century model in the 21st century?

Our lifestyles have changed, our needs too. So it is the way we understand the “city living” concept as a whole that needs rethinking. Much more than a mobility or urban re-development project, this is a project for life that Brussels City Council wants to build for its inhabitants. The adaptations are still recent, the definitive developments must start in spring 2016. Until the definitive inauguration of the new re-developed pedestrian area, in 2018, the City Council will continue to work for residents, traders, the city centre’s cultural and economic agents in order to respond consistently and appropriately to their needs. “

» Mobility » Brussels: the dawning of a revolution?