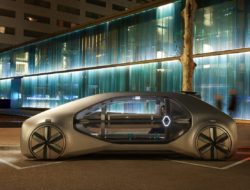 Take a car as you would take the tube

When churches are transformed into Wi-Fi hotspots

Modular buildings, self-driving cars, robots delivering the mail… The smart city made by Google offers many promises. But its model raises concerns.

It is the player no one has seen coming, or maybe that everyone feared was coming. Alphabet, Google’s parent company, launched its subsidiary Sidewalk Labs in June 2015, thus revealing its ambitions: we will have to take them into account for all tenders regarding the smart and sustainable city.

Through its subsidiary, the giant of the net is already active in New York and Toronto. In New York, Google plans to install 10,000 connected and multi-purpose terminals in the public space. The so-called LinkNYC project, financed by advertising, offers several free services via its digital terminals. Ultimately, these terminals will be equipped with sensors measuring air pollution, noise, pedestrian flows etc. Similar terminals will be launched in London this summer.

In Toronto, Sidewalk is committed to creating a ready-to-use model town by 2020, on the 5ha of brownfield in the Quayside district, near the Ontario Lake. The web giant promises self-driving cars, an energy network without fossil fuels, modular and scalable buildings, a delivery service by robots, LED lights in the roads that could change the size of cycling tracks and heated roads that melt the snow to unblock traffic. The first inhabitants are expected as early as 2022.

The promises are many, but the model raises concerns. The smart city is meant to be inclusive, participatory, democratic and sustainable. However, Google plans to build an ultra-connected city, with plenty of sensors, trackers and facial recognition cameras. In short, a city fuelled mainly by personal data, which gives rise to fears of breaches of privacy.

Google’s project, endorsed by Prime Minister Justin Trudeau himself, leads to controversial discussions on who will be the owner of the collected data. Businesses who want to observe how people connect to the urban space, real estate developers or the cities themselves? Who will be allowed to use these data, and what will be the conditions to do so? If the future of cities is connected, cities will have to reflect on protecting the data of its residents, far beyond the strict application of the new GDPR regulation. They will also need to think about the sovereignty of their public data and data of general interest. Otherwise, Google Town, the perfect town where people are happy, don’t pollute and move around with a simple snap of the fingers, could well become some kind of Truman Show Seahaven.

» Other, Technology » Google spells out its ambitions for the smart city