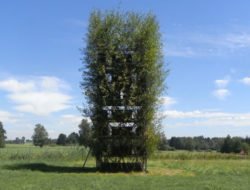 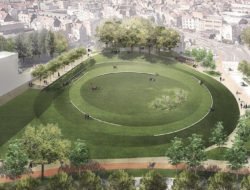 Ferdinand Ludwig, architect and researcher at’ Stuttgart university, is working on a revolutionary project: living buildings. His idea? To merge several trees that, with the aid of metal frames and after several years’ growth, produce buildings that are both robust and natural.

Baptised “Baubotanik” (or “botanic-build”), this new building concept is inspired by an ancestral technique. In particular, by the way indigenous peoples like the Khasi, in India, let ficus roots grow to form vegetable bridges over rivers. An amateur botanist and also an enlightened engineer, Ferdinand Ludwig studied tree growth to integrate it in building construction.

One of his first projects, built in Nagold in 2012, is much more than a hut in the woods. It is a veritable architectural feat. “Le Cube is formed at the base by a steel structure, to which containers containing around 1000 plane trees are fastened, Ferdinand Ludwig explains. With time, they will all merge together to form a single living organism.” It will then be possible to remove the steel structures with the end result being a living building made of a single tree. Although the result may well not be visible before 2028, this new architecture has several advantages: feeling of well-being when the wind blows in the foliage, pleasant freshness inside the cube, replanting of urban areas. Not forgetting the attraction of a building that changes its appearance every season.

Will we be able to live in these living buildings one day? Ferdinand Ludwig, boss of a design office devoted to this discipline, is in no doubt. But there is still a long way to go. “The Baubotanik is still at the experimental stage. We have managed to accelerate the growth of the trees, but some factors like humidity, cold or excessive rises in temperature are still beyond our control, the architect concedes. The plane trees of Nagold, for example, have had to deal with difficult weather conditions. And we had to learn how to manage these problems. But in the future, we will be able to build buildings, bridges and even towers following the same procedure.”