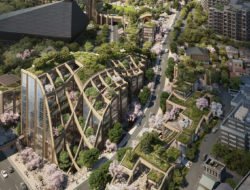 With his teams based in Tokyo and Paris, Sou Fujimoto designs projects in Japan and Europe. These include the one in Paris, called “Mille Arbres” (A Thousand Trees), considered a model for 21st-century urban planning, and the future Delta Tower in Brussels. Who is this Tokyo genius?

Sometimes, a building’s architecture can transform the image of an entire city. This is the case with “L’Arbre Blanc” (The White Tree). Its outstanding feature: multiple balconies pointing out all around it, arranged fan-like, to encourage owners and tenants to live both indoors and outdoors in a city where the sun shines most of the year. At the top, there is a 360° panorama from a cocktail bar (with a small catering service). At more than 55 metres high, the view is breathtaking.

If, since the project was unveiled in 2014, this residential tower has continued to arouse curiosity, it is now established in the Montpellier landscape, both for its extravagance and its philosophy. Inaugurated this year, the iconic 17-storey building, came straight from the eccentric and bright imagination of Japanese architect Sou Fujimoto, one of the leaders of the new generation of Japanese minimalist architects.

‘Even if the expression is often overused, creating genuine living spaces corresponds to my vision of architecture,’ Sou Fujimoto explains. ‘To do so, I integrate data such as climate, lifestyle or aesthetics, into each project as an essential process for producing meaningful architecture. To reinvent the tower, we wanted everyone to be able to take ownership of it. We therefore created public spaces at both ends.’

A Tokyo University graduate, Sou Fujimoto created his firm in 2000. His work focuses on the relationship between artifice and nature, technical and vernacular. Obsessed with white, light, and intervals, he seeks to reunite nature and architecture, offering a new way of living. In 2012, he was represented at the Japanese pavilion of the Venice Biennial. Despite greatly admiring France, Fujimoto had to wait until 2014 before he could build there. That year, along with Manal Rachdi (OXO), Nicolas Laisné and Dimitri Roussel (partners at the time), he won the contest for L’Arbre Blanc in Montpellier.

Since then, the firm has established a branch in Paris and has multiplied its projects, including “Mille Arbres” (Thousand Trees), winner of the Réinventer Paris (Reinventing Paris) competition. Designed as an ‘inhabited forest’ over the ring road, “Mille Arbres” will connect Paris to Neuilly and will constitute the largest inhabited bridge in the world. This 63,000 m², floating island of vegetation spans eight floors. It was designed to reconcile city and nature by planting 1,000 trees at heights up to 15 m. The mixed-use building will include 30,000 m² of office space, high-end rooftop villas, social housing, a food court, a Hilton hotel and a kindergarten.

Deeply affected by natural disasters such as the Kobe earthquake in 1995 and the Fukushima earthquake and tsunami in 2011, Sou Fujimoto has totally reconsidered the way people settle into their environment. ‘I would be proud if I could do something to make our society more open. You know, what I would really like to do is build a city, well, a small town,’ says the architect. That is my dream: to build an entire town that would encourage people to bond.’ Perhaps he will do so with the future Delta Tower in Brussels, for which he has provided the drafts. Obsessed with transparency and fluidity, we can rely on him to successfully create a new kind of space within the walls.