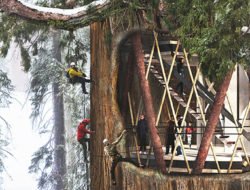 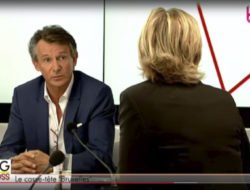 The artist Christo is exhibiting in Brussels

Christo, the artist who wraps up everything that moves (or does not move), is not “one” but “two”. Explanations at the “Christo & Jeanne-Claude. Urban Projects” exhibition, the first major retrospective since the 1980s.

For 16 days, from June 18 to July 3, 2016, Christo completed one of his most beautiful projects: “The Floating Piers”, a floating path connecting the city of Peschiera Maraglio to the islands of Monte Isola and San Palo, on Lake Iseo, in northern Italy. Originally, the idea of a project enabling you to walk on water was born in 1969 for the Rio de la Plata delta in Argentina. It was never realised.

It was not until 2014 that the idea was revived again during a trip to explore the lakes of Northern Italy. Dazzled by the azure blue of Lake Iseo, the artist wanted to build this 16 metre wide and 3 kilometre long pedestrian road. Treading on the structure, whose tones go from yellow to orange, depending on the light and humidity, gives the impression of moving on water, “an inexplicable feeling of freedom,” says its designer. Thanks to Christo, the Floating Piers have allowed two million people to literally “walk on water”. From now on, a work published by Taschen – with the artist’s drawings and photographs and texts by Wolfgang Volz – will recapture the entire fabulous adventure of this creation.

A man and a woman

But there is even better. For the first time since the 1980s, a retrospective reveals the works of Christo Vladimiroff Javacheff and the late Jeanne-Claude Denat de Guillebon, who died in 2009. Because, whether they wrapped the Reichstag and the Pont Neuf, whether they floated pink fabric petals off Miami and whether today he plans to erect the largest sculpture in the world in the United Arab Emirates, 150 metres high and composed of 410,000 oil barrels, “Christo” has never been a single man … It’s a duo of shock in life as in the city, whose pseudonym is only the name defining the work, so recognisable, of this pair of artists.

Whether they wrap up the Reichstag or the Pont Neuf, their art lives where it is created and for a fixed period. But once the work exists only in the memories (and the countless photographs and films) of the visitors, there remains all that preceded it … Sometimes, for years. “Land art works like this. You have to interact with a physical site, with the people who live there, with local laws, and discuss for endless hours something that does not exist and has never been attempted before, says Christo. The projects are in the minds of those who want to make them, but also those who want to prevent them … And it is from this dynamic that energy is born.” These are urban works and their beginnings – discussions prior to technical aspects – but also 80 projects that have never seen the light of day, which will be unveiled at the ING Art Center in Brussels through models, drawings and collages, volume tests and sketches of materials.

Some projects sometimes aborted more for political than aesthetic reasons, such as “Over The River”, a 68 km sail across to be spread over the Arkansas River in Colorado. The reason for the abandonment? President Donald Trump. “I do not want to deal with him. Although this is a project on which my wife Jeanne-Claude and I have worked for more than 20 years, Christo lets slip. But Jeanne-Claude was more radical than me, she would have done the same.”

» Architecture, Culture, Other » The artist Christo is exhibiting in Brussels