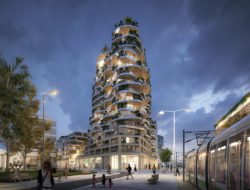 The “High Line” of London was inaugurated this summer

The Tide, an elevated arty park, opened in July on London’s Greenwich Peninsula. Here’s why Brussels should be inspired by it.

In early July, The Tide was inaugurated in south-east London, in the new Greenwich Peninsula neighbourhood on the banks of the Thames. This linear cultural park includes bridges and wooden platforms surrounded by trees and natural vegetation. It is the first space of its kind in London. The walkways, elevated nine metres above the ground, will form a five-kilometre circuit once the project is complete.

Originally, this space was a 200m long, abandoned Victorian railway viaduct in Hammersmith, part of the Kensington-Richmond line which opened in 1869 and closed in 1916. The idea of turning it into a promenade based on the model of the New York High Line came about thanks to a public tender launched by the city.

Designed by Diller Scofido + Renfro, co-designers of the New York High Line, The Tide is also an open-air living art gallery. For its opening, renowned British and international artists stormed the elevated park during a festival. The Tide also offers monumental works and curiosities from the design world to explore. The first works will be on display this summer, including two sculptures of the iconic British artist Damien Hirst’s Treasures from the Wreck of the Unbelievable; Head in the Wind, the 8-metre work by British artist Allen Jones; and Siblings, the large-scale, illusory work created by Morag Myerscough.

» Architecture, Culture » The “High Line” of London was inaugurated this summer