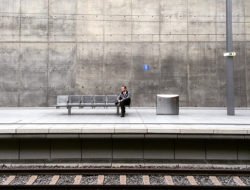 Covid and the rail network: what will be the...

On the Gustaf-Gründgens-Platz, in the heart of the city, stands a building that should not logically be there: an urban mountain.

Completely covered with plantations and greenery (roof and facades), this building quickly established itself as one of the new landmarks of the city. The building is in the finishing phase, the plantations have just been finalised.

With a total area of 42,000m2, the Kö-Bogen II project offers a mixed-use of offices, commercial premises and leisure facilities. This new “green heart” of the city, designed in the shape of a valley, guides the residents to the Municipal Theatre and the Dreischeibenhaus, two graded buildings that are typical of post-war modernism. On an adjacent building, the roof of which is gently sloping, one can even take a stroll and sunbathe on the lawn.

The facade and roof of Kö-Bogen II are completely planted. This “vertical park” consists of 8 kilometres of charming hedges, the leaves of which change colour throughout the year. These plants are more than just spectacular: they provide natural cooling, reduce the heat effect felt in the city centre and even help to purify and clean the ambient air. “Charming hedges are common in Düsseldorf,” explains the boss of the Ingenhoven agency. “The plants we selected keep their leaves in winter. They are resistant to high wind speeds, are unlikely to be infested with vermin and require only two to three cuts per year. And in winter, no heating is necessary.”

The preparation of hedges was started as early as 2016 by a nursery. Delivered last autumn on the construction site, they already had a well-established root system (to prevent plants from wilting as soon as the building is received).

The square that houses Kö-Bogen II was initially a simple “slab” covering an underground car park. Since 1992, Christof Ingenhoven, the designer of the project, has been campaigning for a “complete repair of the city” including the rehabilitation of this square which, until 2013, was overlooked by a viaduct. Today, it is a whole urban space that is revitalised, as if this part of the city centre has finally found peace.

Thanks to very close cooperation between the architects, the city authorities and the customers, the appearance and functionality of this square are permanently improved. The ultimate challenge for Kö-Bogen II: to be adopted by the citizens as a reactivated and authentic place, and a new green centre.

» Architecture, Environment, Other, Real Estate, Technology » Düsseldorf: a mountain in the city!