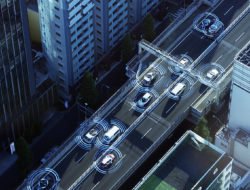 It is now possible for energy to be produced just from people walking by. A new, promising, economical, and sustainable technology.

Piezoelectricity is a physics phenomenon by which mechanically solicited crystals produce electricity. The most well-known application of this principle is the electric arc used to light a gas hob. Or to light the burner of a water boiler. To produce this current, we have an infinite energy supply: the mechanical energy generated by passers-by. All that is needed is for the ground they walk on to be covered with panels made of crystals that can produce the low electric current. Ceramics work quite well, for example.

The limited intensity of this micro-current is quite capable of powering low-energy electronic components such as street lighting or public wireless networks. This system would also mean urban Internet would be less dependent on servers located on the other side of the world, in favour of more local installations.

Calculations estimate it would only take 180 hours of ‘human steps’ to make each specifically placed panel profitable. The result would be clean and sustainable energy production, albeit limited to low-energy installations. Pedestrians themselves, as the main users, would therefore contribute to an intelligent urban option generating part of the necessary energy.

The principle of piezoelectricity applied to road traffic. © Department of Electrical, Electronic and Computer Engineering, University of Pretoria

Based on the assumption that movement produces energy, other researchers have extended the idea to cars. Two companies (Innowattech in Israel and Pyro-E in California) have developed systems that are basically the same, except that cars produce the energy by driving on a special surface.

Several pilot projects (using either walking or car energy) have been developed in recent years. A road toll in Pretoria, South Africa, had sufficient road traffic for the experiment to be useful. A subway station in Tokyo became self-sufficient thanks to user footsteps. Sometimes, these experiments are remarkably simple: a Dutch café managed to generate the electricity needed for its revolving door simply by harvesting the energy from customers entering and leaving the establishment.

The only obstacle to this sustainable source of energy is that there needs to be movement otherwise the system will not produce anything.