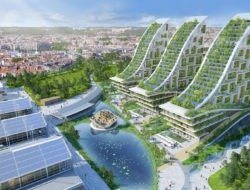 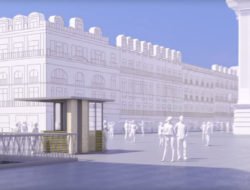 Buses pollute, make noise and give off heat. To make the city more pleasant, Madrid City Council has just approved an ambitious pilot project. It involves installing green spaces on the roofs of bus shelters and buses in order to absorb their noise and their pollution and lower by an average of 3.5ºC the indoor temperature there in summer.

The project called “Muévete en verde” or “Get Around in green” in English, is the brainchild of Marc Grañen, a Spanish artist and landscaper. With the help of engineers, he has created a full-fledged ecosystem, which can be fixed onto the roofs. Equipped with a watertight irrigation system, substrates and movement-resistant plants.

Apart from its aesthetic side, this project has an environmental objective. The planted roofs will absorb the pollution and reduce the noise and heat. In summer, the temperature inside the buses could drop between 3 and 4 degrees. Which is not insignificant. But above all, 1 m2 of these moving islands can absorb 20 kg of CO2 per year.

Project to be launched this summer

With his company Phytokinetic, Marc Grañén already tested his idea in 2013 on a bus from the Castell Montgrí camp site, in the town of Estartit, a seaside resort on the Costa Brava. Convinced by the ecological side of the initiative, Madrid City Council gave him the green light to try out the project on lines 27 and 34, those most used by Madrid residents. 130 bus shelters will also be planted this year, says La Vanguardia. Each “garden” will thus be formed by metal mesh and durable materials, capable of withstanding movement without generating water leaks.

If it passes the test, the concept will then be extended to the entire network. Seeing that Madrid’s public transport company, EMT, runs 1,900 buses, this makes nearly 20,000 square metres to be fitted, i.e. potentially 400 tons of CO2 absorbed per year. Not counting the bus shelters, which will also be planted. For an average cost of 2,500 Euro.