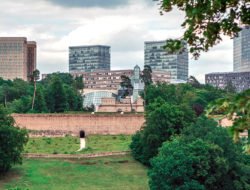 Luxembourg is counting on office space

In the space of a decade, Singapore has become the ultimate model of a smart city. It has just been elected “Smart City 2018” at the  Smart City Expo World Congress held in Barcelona. Only seven candidates reached the final, out of 473 applicants. Explanation.

The Asian City-State is a laboratory for smart city process experimentation and industrialisation. Foreign cities (especially Chinese) are making a point of replicating what works in the small island of 5.6 million inhabitants. One of the reasons Singapore is advantageous for full-scale testing, is the absence of any regulatory body. Here, state and community merge, limiting the number of players involved. Decision-making is accelerated. And if the city wants to monitor the mobility of high school students, it has the means to distribute 25,000 sensors very quickly.

How did this 719 km² city-state rise to the top of the podium, above Santander and Boston? Dynamic routing algorithms for public buses, real-time parent-teacher portals and even predictive analysis of leaky water pipes… As with the space race, this success is due in particular to strong political will. The Smart Nation programme was unveiled in 2014 and aims to make Singapore the first connected state, focussing essentially on digital mobility management.

As the autonomous vehicle is set to be an essential element in public transport, Singapore largely funds research that is structured through public-private partnerships and the development of demonstration programmes. The city-state relies heavily on the skills of start-ups and foreign companies that it seeks to attract. Consequently, Singapore is thought to be home to more than 1,600 start-ups according to the latest Startup Genome report. Singapore has also quickly changed its legislation to allow companies to test their technology on its streets.

The other two fields of development are logistics and waste collection. In addition to autonomous taxis or Wi-Fi in transport, Singapore hopes to create a national system of digital identification and ensure that 95% of transactions between residents and the State (house sales, paying bills, or even social housing requests) are carried out online.

However, the city-state brings new constraints in data management. Security experts and civil rights defenders are concerned about some elements of the programme, such as those related to surveillance. In March 2018, the City-State announced a surveillance programme that would install 100,000 lamppost cameras to detect and track its inhabitants’ movements, after the cities of Beijing and Shanghai. Hence, the city has no open data portal or model for civil society participation. Nonetheless, its inhabitants, who are keen on new technologies, assiduously contribute to government programmes to collect personal data.